I say this pretty frequently, but buckle up, ya’ll. I’m about to tell you the story of a terrible, no-good, very messed-up weekend.

To start it off, you need some backstory. I live in Maine, less than a half hour from the ocean, where we frequently boat. We have what’s called an out-board motor on the back of a 23-foot boat that has a cuddy cabin. I tell you this so that you know, before I even start this story, that I am not a complete novice when it comes to boating.

Now, let’s fast forward to Thursday Afternoon. Let me set the stage for you. One of my best friends is getting married on an island, off the coast of Maine. Her partner is a lobsterman and has a nice big lobsterboat. Since we’re going out there for the weekend, we decide not to take his boat. We take our boat instead, and meet them about two hours later than originally planned to get everything out there. Fantastic.

It’s foggy, we’re a bit groggy, and we load up the boat and take off.

When we get to the dock, and start shuttling stuff over to the skiff which will take us to shore – again, they’re getting married on an island – I volunteer to stay on the boat so that they can take more stuff over.

As soon as they’re gone, I start to notice water building up in the back of the boat. Soon, like within two minutes or so, there’s about six inches of water back there. At that time, the guys get back to the boat, and I start using the bailerscoop from the skiff to get the water out of up top, and we turn on the bilge pump. I bailed out over 100 gallons of water, ya’ll.

Of course, I pipe up and say, “Did we forget the plug?” – THIS HAS NEVER HAPPENED TO ME BEFORE. The guys? Yes. Me? No.

We found the backup plug. But then, we couldn’t reach from the edge of the boat to put it in.

Someone had to get in the ocean, ya’ll.

The men are standing there like, “Well one of us has to go in.” And they’re looking at each other, very intensely.

So I’m already arm-deep in the water, since I was wearing a tank top and the guys were wearing real shirts.

I jump in. Into the ocean. In September. In Maine. At night.

We get the plug in the boat, and my friend’s partner snapped this picture as I was climbing out of the ocean. 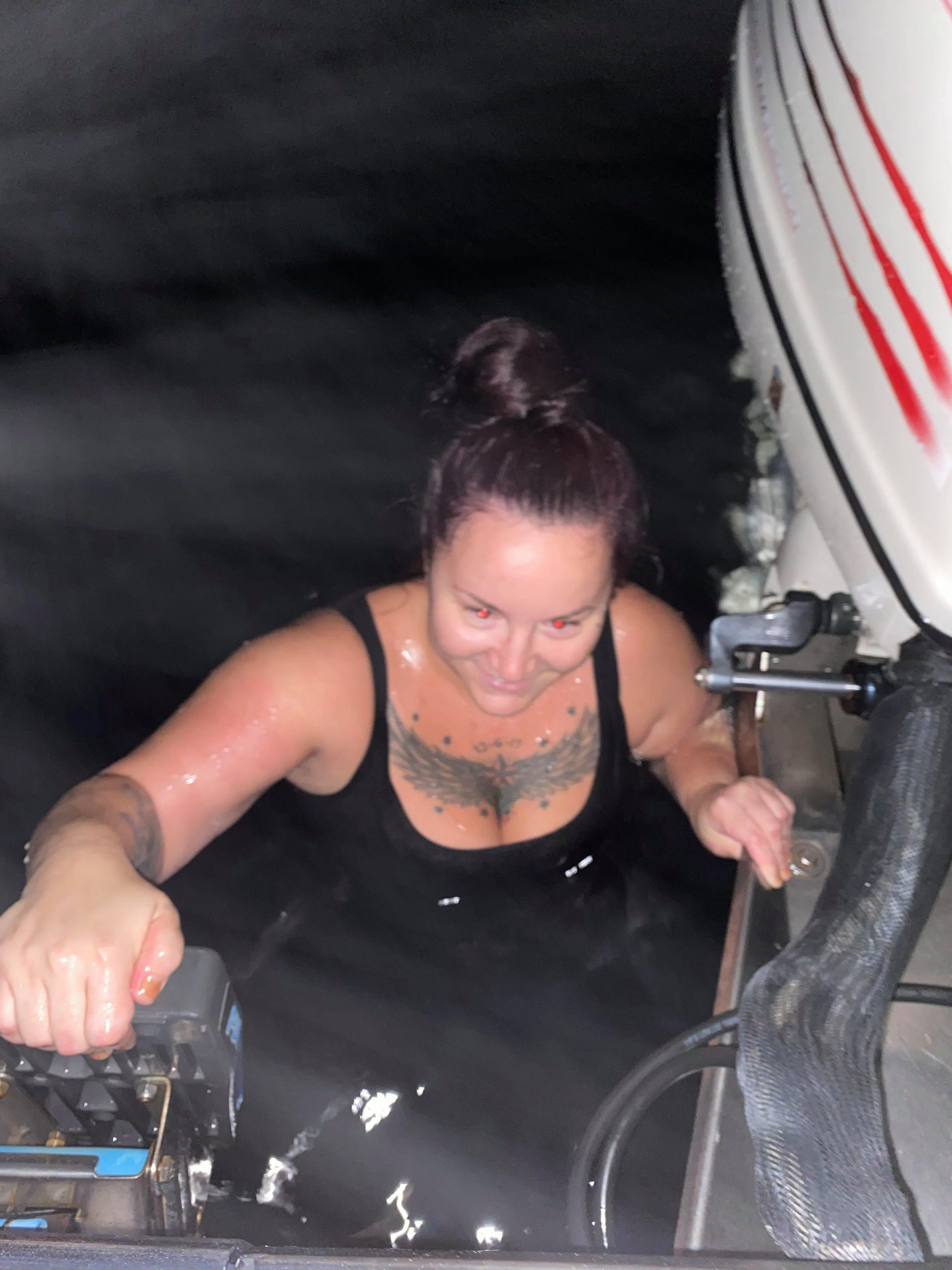 THE NEXT MORNING I FIND OUT

Less than a week before, in the area, one of the local lobstermen encountered a FUCKING GREAT WHITE SHARK. Next to an island that I could see all fucking weekend from our island.

THEY LET ME GET IN THE OCEAN WHERE A GREAT WHITE SHARK HAD BEEN SEEN.

But wait, there’s more terrible things that happened that weekend.

As for the boat? It vanished from the dock the next morning. In the wind. Immediately, we thought that it had sunk to the bottom of the ocean. We absolutely thought we’d lost it. So, the owner of the island was there, and they’re getting ready to go out on his boat to look for our boat. That’s when the guys saw what you can see in the second picture.

Nestled in on some seaweed, ON THE SAME ISLAND, just chilling. Perfectly fine. It scraped the paint on the hull.

GUYS. Do you know how drastic things could have gone? The boat could have flipped. It could have been a complete loss. Instead, in the wind on Friday morning, the two ropes that had been used to secure the boat, snapped. When that happened, our boat decided to just chill out and wait for rescue.

TWO DAYS. Ya’ll. THAT WAS THE FIRST TWO DAYS OF OUR STAY ON THE ISLAND.

The wedding? It was gorgeous, and the couple? Beautiful. They’re couple goals, ya’ll. 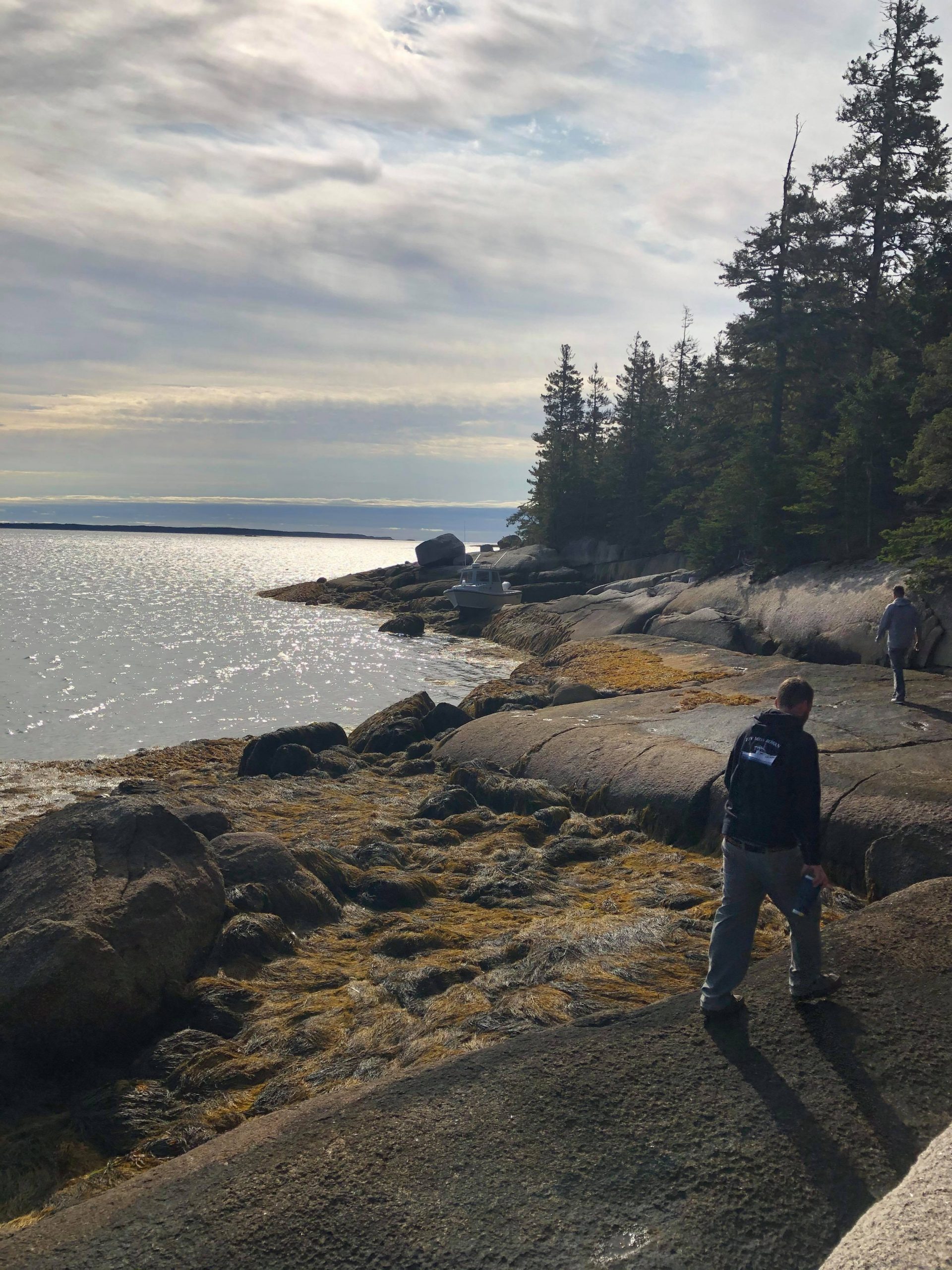 I'm about to share WAY TOO MUCH information with you. But I strive to be as honest and open with you as possible, because why wouldn't I? SO - if TMI is something you hope to avoid- here's the sum of it: Ground Zero is moving by ONE WEEK to 10.31.21 ON TO THE TMI -...

END_OF_DOCUMENT_TOKEN_TO_BE_REPLACED

Firefighters are My Dirty Pleasure

I'm furiously writing and revising Ground Zero, and I can't wait for you to read it, coming in a special release on 10.24.21. I'm just gonna spoil it for you now… It's Josh Harmon's book. Do you remember him? How does he make the jump from cop to firefighter? Well,...

END_OF_DOCUMENT_TOKEN_TO_BE_REPLACED

Who’s Hitting Below the Line?

TERI AND LOGAN'S STORY ISN'T THE END… Before you get your hands on Below the Line, I want to take a minute to explain some of the things you're going to see. Logan and Teri both went through Hell and back, before they were old enough to really know anything about...